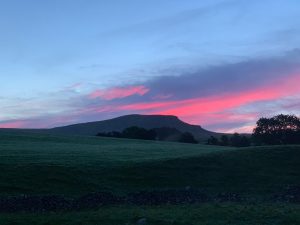 On Saturday the Mandate team took on the Yorkshire 3 Peaks challenge, to raise money for Dementia UK and the British Heart Foundation. This was the biggest challenge many of the team had taken on, but they were up bright and early to start at 6:30 in the morning. 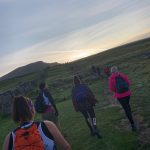 Pen-y-ghen
The first mountain was Pen-y-ghent, which is the smallest of the peaks. Spirits were high as they climbed the hill to the first scramble over the edge. Heading to the top there is a narrow ledge where you have to physically climb with every part of your body. At the top is a fantastic view of the next two mountain. With a decent down, injuries kicked in. The first down was knee pain, which was a pre existing injury for Amy. Sarah and Louise both with pains in their feet. The 6 mile walk to Ribble Head viaduct meant pushing through. Richard (Amy’s husband) met the team with lots of food, with Sarah’s mum joined with her famous Mars bar crunch. 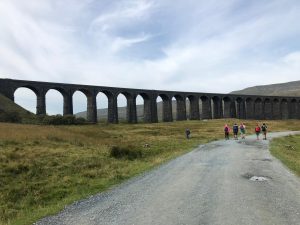 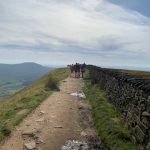 Whernside
Refuelled and stretched out the next mountain was in sight. Whernside  is the highest of all the peaks. Realisation of what we had taken on was setting in, as we walked the gradual incline up the hill the. Ryan, Connor and Aimee (Louise’s daughter) kept a steady pace at the front, making it look like a breeze. Amy’s knee pain had progressed into a shooting pain with every footstep that was taken, Sarah was keeping strength with Liam’s support at the back. When descending, Louise was starting to feel the pain and at the bottom of Whernside was where we almost lost Sarah, who felt broken. If it hadn’t been for Amy’s husband not having signal to come and get her she would have taken the lift home. Instead we topped up with an ice cream and gave Sarah a much needed rest she needed to take on the next one. 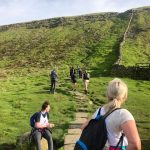 Ingleborough
Ingleborough the second highest of the peaks and the climb up is the steepest. By this point for many just putting one foot in front of the other was all that could be thought about. Ryan and Connor lead from the from with Aimee not far behind, up the 100 ft climb. The climb brought a shift in weight, which made it easier to get to the top for Amy and Louise’s. Being one of the strongest Liam held back with Sarah. Words of encouragement went down the hill, until Sarah emerged at the top. After a quick break the team pushed up the next set of steps and scrambled to the top of the mountain. When we realised there was a walk to the other end of the mountain to get to the correct point the look on our faces was a picture. Walking across the rocky ground we all made it to that point. Now to tackle the walk back down to Horton-in-Ribblesdale.
By now 4 out of 7 of the team were suffering with injuries and fatigue was definitely setting in. We walked as fast as we could down the paths as the sun was setting behind us. As the dark set in, the torches came out. With all our might we pushed through the barriers and gave it our all. When Liam said he could see the train station which lead to the village we pushed harder. The walk to the finish felt like the longest part. On reaching the end we were greeting by Amy’s husband with pizza and beer/wine.
Thank you
This challenge was tough and I am sure many of us could have said we were going to stop. It was our collective strength and support that meant not only did we finish, we ALL finished together as a team, just the way we had started and we raised some money too. 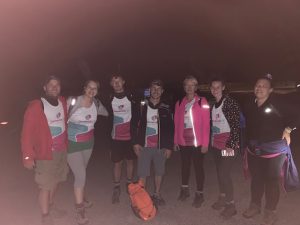 Thank you to everyone who has supported us through this journey and those who have donated too, the money is going to two great causes.
If you would still like to donate, don’t worry there is still time https://www.justgiving.com/fundraising/mandatesystems
On Friday we will be taking the total and Mandate Systems will make matching donation to the British Heart Foundation.
Again  thank you to everyone.
We use cookies to ensure that we give you the best experience on our website. If you continue to use this site we will assume that you are happy with it.Ok